Protest against the amendments to Citizenhip Act continued on Wednesday across the country.

On Tuesday 21 people, including 12 policemen and six civilians were injured in violence in Delhi’s Seelampur. The Delhi Police has arrested six people in connection with the violence.

Here are the live updates:

Anti-government posters covered the long boundaries of Jamia Millia Islamia as protest against the controversial Citizenship Amendment Act and the proposed National Register of Citizens outside the university continued for the third consecutive day on Wednesday.

The protesters, including students and local residents, hung a large map of India outside the varsity gate number 7 showing the places where students from other universities across the country are carrying out protests against the CAA.

Ms. Banerjee started her march on foot from Howrah Maidan on the other side of the river Hooghly after administering oath to her supporters that they would maintain peace during the march. The rally crossed the Howrah Bridge and concluded at Esplanade after covering a distance of over five km.

“We are all citizens,” she said and gave a call to withdraw the CAA. “CAB, NRC wapas lo, she asked the crowd to repeat after her

Students of the University of Madras and other colleges continued their protest against the Citizenship Amendment Act and the police brutality against students in New Delhi.

According to a student, on Tuesday there were more than 150 members inside the campus, but on Wednesday only 25 were protesting inside, while the rest of the students had been stopped outside.

The students shouted slogans against the Union government for the enactment of the CAA and they termed it ‘discriminatory and divisive’.

DMK, allies to hold rally against CAA on December 23

DMK president M.K. Stalin on Wednesday said his party and its alliance partners would hold a massive rally in Chennai on December 23 to bring pressure on the Centre to repeal the Citizenship Amendment Act (CAA).

Talking to reporters after chairing a meeting of alliance partners at the DMK headquarters, Anna Arivalayam, Mr. Stalin made an appeal to all sections of the society, cutting across party lines, to participate in the rally.

A Supreme Court Bench headed by CJI Bobde has refused to stay the amended Citizenship Act that grants citizenship to non-Muslims from Afghanistan, Pakistan and Bangladesh, who have left their land facing religious persecution.

It has posted the case to January 22, after issuing notice to Centre.

The Delhi High Court on Wednesday agreed to hear a PIL seeking setting up of a fact- finding committee to look into the recent violence at Jamia Milia Islamia University.

The petition was mentioned before a bench of Chief Justice D N Patel and Justice Rekha Palli by advocate Rizwan and the court allowed it to be listed on Thursday.

The plea has sought judicial inquiry into the action taken by the police, including allegedly firing at students.

It also sought proper medical treatment and compensation for the injured students. (PTI)

Kamal C. Najmal from Malappuram staging a novel protest against the Citizenship (Amendment) Act in front of the Secretariat on Wednesday   | Photo Credit: S. Gpakumar

The hartal, called by the Social Democratic Party of India (SDPI) and allied organisations under the aegis of the Joint Action Council (JAC), was mostly peaceful but intense in pockets across Kerala.

In engineering colleges in the State on Tuesday when many final-year students chose to boycott their examinations.

While the agitating students claimed that their action was also in solidarity with those who were unable to appear for the examinations on account of the Statewide hartal on Tuesday, the teaching community has been critical of the move, with many viewing the protest as ill-considered 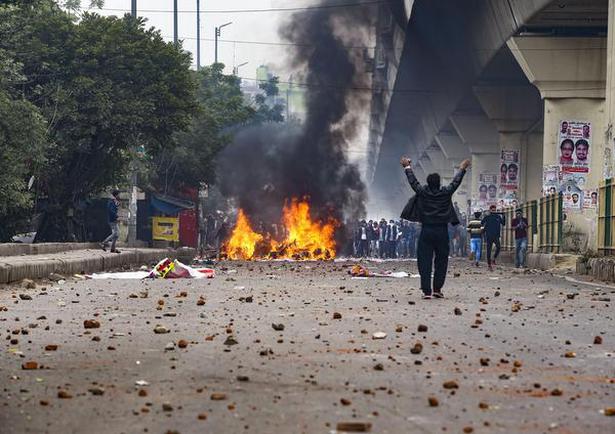 Six persons have been arrested in connection with violence that erupted in Seelampur during protests against the Citizenship (Amendment) Act on Tuesday, police said on December 18.

A senior police officer said that two First Information Reports were registered in connection with the case on Tuesday; one in Jafrabad and another in Seelampur.

Normalcy returned in Guwahati while the curfew imposed in Dibrugarh was relaxed for 14 hours since 6 a.m. on Wednesday.

No fresh incidents of violence have been reported in Assam on Wednesday morning.

Businesses and banks in Guwahati were open and vehicles plied the roads but schools and colleges were closed. Mobile internet services remained suspended.

Flight operations and railway services resumed in Guwahati on Tuesday while flights to and from Dibrugarh airport were also operating as per schedule, officials said.

Curfew was also relaxed for 14 hours in Shillong on Wednesday even as the ban on mobile internet services will remain in force, officials said.

A delegation of Opposition parties, led by Congress president Sonia Gandhi, petitioned President Ram Nath Kovind on Tuesday to advise the Union government to withdraw the Citizenship (Amendment) Act (CAA) and accused the government of having no “compassion as it shuts down people’s voices”.

“All of us, representatives of 12 different political parties, have met the President to plead with him to intervene in the situation in the Northeast, which is now spreading throughout the country, including the capital in the Jamia university, because of the Act,” Ms. Gandhi told presspersons after handing over the memorandum, signed by leaders of 12 Opposition parties, including the CPI(M), the CPI, the DMK, the SP, the Trinamool, the RJD, the National Conference, the IUML and the AIUDF.

Those damaging railway assets should be shot at sight: Angadi

Minister of State for Railways Suresh Angadi has kicked up a controversy, saying those damaging railway property during the protests against the Citizenship (Amendment) Act should be shot at sight, if need be.

Talking to journalists here on Tuesday, he said that while everyone should support peaceful protests, damaging public property in the name of a protest should not be tolerated. Those involved in violent protests and damaging railway property were “not Indians but illegal immigrants”, he said. “Such anti-social elements should be shot at sight.”

If India can establish the citizenship of Bangladeshis, allegedly residing in India illegally, Dhaka will take them back. However, New Delhi has not informed Dhaka of anything about the Bangladeshis living in India, Prime Minister Sheikh Hasina’s foreign policy adviser Gowher Rizvi has said.

Mr. Rizvi was here to open a three-day celebration of Bangladesh’s victory in the 1971 Liberation War at the office of the Deputy High Commission here on Tu

First, we want to be assured, there would be peace. If you want to take to street don’t come to us... We want rioting to stop, Chief Justice of India S.A. Bobde tells lawyers A chronology of the Ayodhya dispute

At the core of the nearly 70-year-old Ram Janmabhoomi-Babri Masjid dispute is the belief that Lord Ram was born 9,00,000 years ago in the Treta Yuga, in a room located under what was the central dome of the Babri Masjid

Priyanka at Jharkhand: Elect govt that listens to students

Punjab: Two killed in Tarn Taran in blast in agricultural...

With anti-NRC resolution, Mamata looks to strike at the...

Why no officers arrested? No answers: Family tweets for...