7-minute call that led cops to Batla House: A look at the encounter 11 years on

Eleven years since India's most controversial encounter in Batla House in which two Indian Mujahideen terrorists were killed and an officer of special cell lost his life, India Today TV accessed a 7-minute call between terrorists that was intercepted and helped crack the case.

The intercepted calls have details of hawala money transferring, planting of the bombs before the September 13 serial blasts in Delhi in which 30 people were killed. The calls between Atif Ameen, head of the northern wing of IM with his associates was recorded seven days prior to the Delhi blasts.

Delhi Police failed to prevent the blasts in Delhi as they failed to decode calls made by Amin, while the conspiracy was being hatched. However, it was only through analysing these calls, special cell tracked the terrorists in Batla House and broke the spine of the Indian Mujahideen.

India Today TV also accessed the only video footage of L-18 flat where the encounter took place. The video shows blood spilled all around the flat, AK-47 and other arms inside the house. In the encounter Atif Ameen and Mohammad Sajid were killed, while two others - Mohammad Saif and Zeeshan -were arrested; a fifth suspect - Ariz Khan - escaped.

For the fidayeen attacks, Atif received AK-47s, pistols, and revolvers in July-August 2008 that were recovered from L-18, Jamia Nagar after an encounter. The most crucial evidence in the case has now been accessed by India Today TV, which shows the first tip-off was received soon after the serial blasts in Ahmedabad on July 26, 2008. 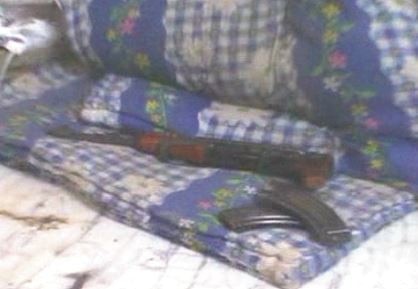 Exclusive pictures of L-18 flat of the Batla House on the day of the encounter.

After the serial attacks in Uttar Pradesh, Jaipur and Rajasthan, Special Cell's Mohan Chand Sharma had sent his team to these places for investigation.

Through scanning the mobile phone dump data, they found a suspicious mobile number 9811004309 which was kept on surveillance. It was later revealed that the number was being used by prime suspect Atif Amin, a student of Jamia Millia Islamia, Delhi.

The call record on September 3, 2008, shows that the caller had asked for Rs 1.5 lakh near the Batla House area. In the call, he also complains that payment was being done in Rs 50 notes and asked for `500 currency. Then the caller gives out a code and the delivery location is decided.

On the same day, two other calls are made for the delivery of money is discussed. By now, the special cell got an idea that the suspicious number holder was in touch with a hawala money dealer who was arranging for funds outside the country.

However, they failed to sense the gravity of the matter that the money was being used to trigger an attack in the national capital. The suspected number remains active till September 10, three days ahead of Delhi blast but later was switched off.

Soon after the blast in Delhi, the special cell again started analysing the call and found how the Indian Mujahideen terrorists discussed their targets. In the intercepted call on September 6, Amin is speaking to his associate Mohammad Shakeel about the parking position of an auto-rickshaw at Ghaffar Market, Karol Bagh.

He also asked him to buy a bag and a bottle of whiskey. It is the same location were a bomb, kept in an auto-rickshaw, detonated in the market. Four more bombs exploded at Connaught Place and Greater Kailash, killing over 30 people.

Through mobile surveillance, cops tracked him around Batla House. On September 19, the special cell stormed the residential building and killed three terrorists.

He said after the Gujarat blasts, intelligence agencies shared the input with state police and it was Mohan Chand Sharma who developed the information and started tracking a suspicious mobile number which let to tracking the terrorists to Batla House.

Speaking about the controversy over the encounter, Karnail Singh said people with vested interest tried to stir controversy. Some activists are always there to raise the question of the job done by the police.

Clearing the air over the death of Mohan Chand Sharma, Singh said, "It was a close team of Mohan Chand Sharma who cracked the case. This was not the first time for his team, they had carried operation even in Kashmir. It is completely incorrect that Sharma died of bullets fired by cops. It was an attempt to divide the team. Sharma was shot by terrorists and in the encounter, two terrorists were killed and two were arrested."

Karnail Singh said there was too much pressure but the special cell team cleared the process of investigation, legal scrutiny and changed the public perception. The investigation carried by special cell helped in the further crackdown. He also urged that there is a need for a national policy on terrorism.

12 injured in a clash in Muzaffarnagar

AAP says BJP troubled with I love Kejriwal campaign in...